Omg. Please hold on until Friday!

Okay…I tried this test about 16 times. Several were interrupted by various outside sources. Like the cat came into the stall and Valeria wanted to kill him. I might consider compiling all the fails together if I get some video editing software.

The first handful of tests were either inconclusive or circular which indicated a girl. The second set of tests that I did a couple hours later were inconclusive or a straight line which meant a boy. While it’s not really clear, something tells me it will be a boy, no matter how much I want a girl. I even used a clip that did the straight line more than the circle just to hedge my bets a little.

My lead rope did not make it out of this process alive.

Who am I kidding? I’m going to end up with a bay colt. Anyone have some guesses?

Woke up to rain and no wind so the nail test will happen today! Which is great because I also woke up to find this:

We’ve got some bagging going on!

I’ve been waiting for a non-windy day to do the nail test. I’m hoping that may happen during all our rain this Sunday-Tuesday. In the mean time I’ve been hanging out with my horses and doing a few foal prepping chores.

First we prepared an outdoor stall for the ‘biggest storm of the century’. Spoiler alert: it barely rained. I was very disappointed.

A few heavy duty tarps and some fresh DG.

Then we let Valeria try it out. She was not amused. 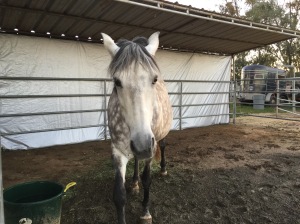 Why did you change it? I don’t like it.

Then the cat moved in.

She went full mama bear on him and chased him out.

A few days later I decided we needed some walls to prevent little legs and bodies from crawling under or through.

And for good structural measure against asshole Andalusians that paw (I’m looking at you my beautiful Land Hippo), sandbags. 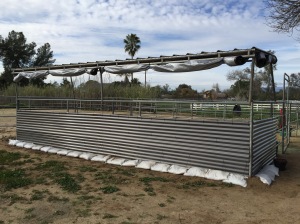 Toss in a few bales of straw around the other walls in another week and we’re good to go. I’m hoping we don’t get much more rain after this next storm.

Anyone else ever built a foaling stall for winter babies?

But first: I actually rode yesterday! It was so great to get back in the saddle. We worked on fine tuning shoulder in, shoulder out, turn on the forehand, turn on the haunches, and leg yields. At a walk and trot.

All that green and she chews on logs.

Sitting the trot was okay as long as we went nice and slow. Getting off did cause a little pain from hitting the ground but I think using a mounting block next time will fix that issue until I’m completely healed.

I start physical therapy tomorrow which is great because I’ve been waiting 2 weeks for that to happen.

Her flanks are starting to sink in. The foal is repositioning in preparation of birth.

On to my land hippo (land hippo seems redundant. They live on land…) update! She’s gotten big. Her status of ‘obese’ has completely changed to ‘all baby’ which is great, she’ll have an easier time foaling. The foal moves a lot, especially around feeding time. I think the foal going to have some serious attitude because Valeria will throw her head up and start backing up in annoyance of whatever the foal is doing. There’s a lot of stomping and kicking her belly during feeding as well (with no flies present) and random spooking from what I assume is the foal giving her a good kick from the inside.

It’s all really cute but I don’t know if I can withstand the adorableness of a baby with attitude. Especially if I decide to sell.

I’m going to do the nail test this week to predict the sex of the foal. Then we’ll see how accurate hedge witch magic really is!

Well…I’ve been MIA for near 3 weeks. I found myself very demotivated to write or be creative while I was on high grade muscle relaxers. Plus just walking to the backyard to see the horses was exhausting.

I did try to return to work Monday with varying success. My leg went numb during my 1 hour commute and I managed to stay for 5.5 hours before my office chair became a torture device. I’ve stayed home the rest of the week out of sheer self preservation. Plus I can work from home, so it’s not all that bad. I am going to take a stab at going into work tomorrow though.

The other reason I didn’t feel like blogging is because my weight spiked by over 12lbs while I was taking all those muscle relaxers and it really got me down. As someone who is forever battling my weight, it didn’t exactly make me feel creative or chatty. Fortunately I actually weigh less now than I did before I got hurt. So all is right in the world!

I really want to get back in the saddle but I’m nervous because I still have pain in my sacrum area. I’m worried I’ll get hurt while I’m in the saddle and that’s a pretty scary position to be in with a back spasm because the only way off is through the pain. I’m game for just about anything but I would rather not do that! 😉
My doctor is suppose to refer me for physical therapy. Either way I hope I go in and they clear me for riding ASAP.

Aside from ALL THAT I am excited to get back to blogging and I have some pregnant mare updates (like the nail test!) to post. I plan to catch up on everyone’s blogs. We’ve got buckets of rain coming so I’ll have a ton of time. ﻿

I made it outside for the first time since I left for Canada (2.5 weeks!) to see Ben and Valeria. Which is kind of crazy considering they’re in my back yard. 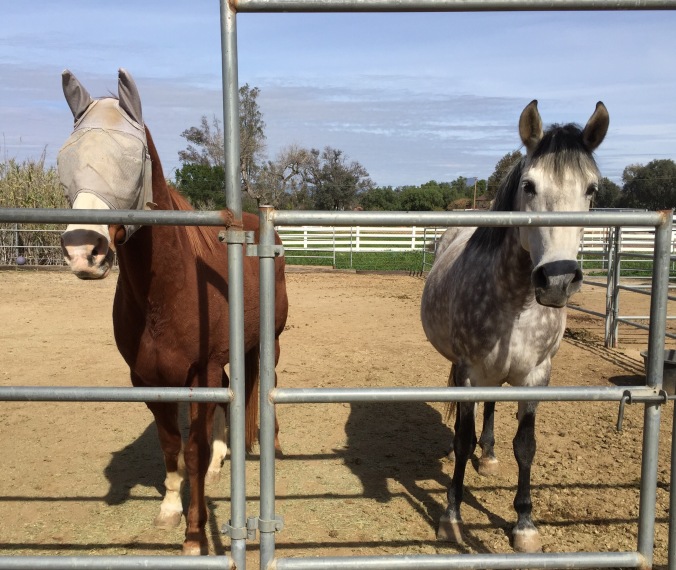 I was so happy to see them and they were (much to my surprise) so happy to see me. They perked up and left their grazing to say hello. Not a common thing for the backyard owner because they normally see you every day.

Ben has gotten fat! It’s times like this when I wish I had horse friends or boarded at a barn to beg rides for him. Instead I’m going to have to cut back on his precious food. I expect swift revenge.

Now I’m looking into back braces to help my recovery and give me support to prevent another back spasm episode (I have a sneaking suspicion my last lesson on Digger was the catalyst for all this). Anyone use back braces? Back on Track and Professional Choice both have one.
Loading Comments...