Now that I’m 5 weeks into healing a broken finger my mind suddenly thinks I can do all the things I couldn’t do before. Which led to me trying to lunge Ben to get video for anyone who might be interested in him. I couldn’t do everything with one hand while he was being squirrely and that frustrated me. I expressed that frustration by calling him names that he doesn’t understand but most certainly understood what I was projecting. It’s kind of ugly to look at a horse and see it reflecting your negative emotions back at you. 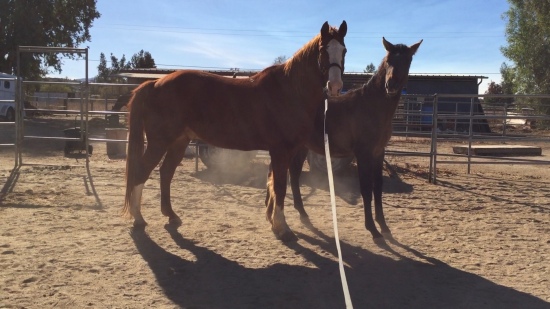 After snapping this picture: Are…are her legs…longer than his????

I talked to R about it when I went up for a lesson later that week and he mentioned that it was a good thing that I was able to step back and get perspective. He always says intent is one of the most important things when working with horses.

That translated really well when I took Catalina and Aria up for some time with R. We worked on trailer loading because my M.O. is to send a horse in and send a horse out. I never bother to stop them once they start, I simply guide. Plus I was suddenly nervous about trailer loading, which I think the horses could tell. Between getting hurt and only having one good hand to handle them with, I had to fake it to make it, but I wasn’t convincing them I was confident. R felt I should have much more control and perceived confidence on what my horses do as they enter and exit a trailer.

Frankly, he’s right. Aria is already trained to only move one step at a time and only load one leg at a time if I bother to ask for it but let’s be honest, I never practice that because it’s boring. My bad. As a result, when he did try to stop her as she was backing out she resisted and smacked her head on the roof. Let me tell you something…if you don’t want to get stuck doing a trailer loading session, do not let your trainer unload your horses because they will see all your flaws. Haha.

We spent 10 minutes just working on Aria keeping her head low as she backed out and then he spent about another 10 asking for her to load and unload one leg at a time, at his speed, all while keeping her head down. I now ask her to drop her head any time we unload because I’d rather she not start to associate unloading with pain.

Then we said forget Aria, she understands the concept, let’s play with Catalina. At the time Catalina would trailer load for me either with a bride of food or if I wanted to do that method where you apply pressure to the lead rope until they step forward and then you release. Neither method is great in an emergency and considering we were on fire, I felt getting Catalina to self-load was prudent.

I should mention that Catalina has seen R once before and during that session he taught her to move toward and away from pressure and how to lunge. She already had a forward cue on her when he started asking her to step into the trailer. She’s a funny little baby. If you let her she will do everything on her own schedule, which is fine when initially introducing concepts, but rather hilarious when you see her whole body finally react to what you’re asking for with a ‘fine, I guess we can do this thing you want me to do’. 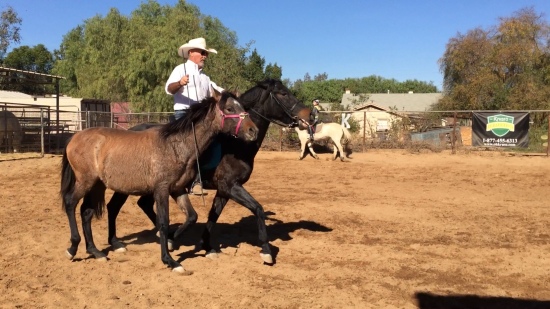 Catalina: Save me. Aria: Get the moose away from me. ((These are ugly training shots where the point was to get them working together, not get them working pretty. Please don’t judge the dark uncollected yak or scraggly moose.))

Her real attitude doesn’t show up until you start asking her to do things on your schedule. She wants to take her time and isn’t particularly impressed if you tap her on the butt and ask her to perform her task with some expediency. That is when her alpha horse side comes out and she throws the smallest of tantrums because really pitching a fit is far too much work in her opinion. She tried the mule technique once but when R whopped her with a pool noodle she didn’t think planting her feet was such a good idea anymore.

The actual reason I brought my girls up that day was to train Catalina how to pony off Aria. I’ve tried many times on trail to wrangle my baby moose but Aria and Catalina bicker a lot and it doesn’t go well when I try to make them walk side by side. Catalina will eventually fall behind until I’m almost pulled out of the saddle because she’s pretending to muck through tar.

R worked some kind of magic because not only did he pony Catalina on Aria with relative ease, he also got them to do figure eights at walk, trot, and canter. To top it all off, they also bicker less and Aria is no longer food and water aggressive to Catalina anymore.

It certainly helped that he had Catalina listening to him on the ground and that Aria was trained by him and not actually as rusty as we had feared from over a month of no work but it’s also really cool to see someone accomplish something so easily when you’ve struggled at it for months. It just proves what I suspected, that my horses are very smart and any failure is all me. Haha. Truer words have not been spoken, am I right? 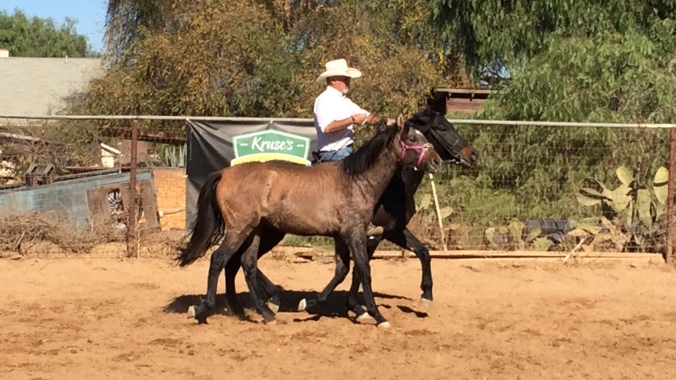 Um…yeah. So she’s pretty much Aria’s size. At 9 months old…

I hope everyone had a lovely holiday season. I’m slowly catching up on blog posts and hope to be much more active on here, if only to tell you all how I’ve gone another week without riding.