At my last lesson I told P that I intended to start prepping for No Stirrup November and wanted to do my whole lesson sans stirrups. I hadn’t lessoned in about a month and Aria has grown rather potato-y in that time (as Spanish horses are prone to do when they start packing on fat). I thought a stirrup-less lesson would be easier for us both. HA! 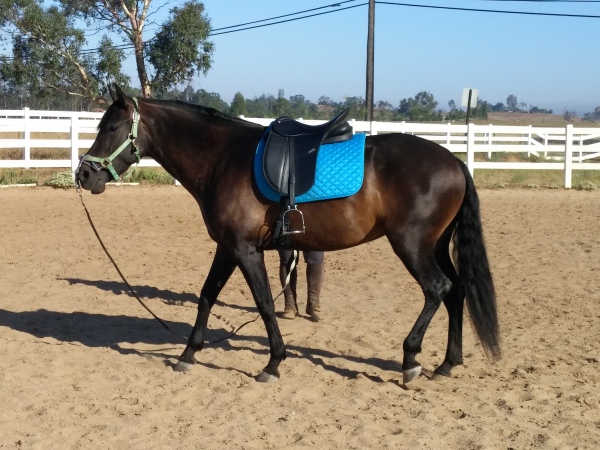 No lesson media so a random ride on my pretty girl will have to do!

First off, never let it be said that Aria doesn’t rise to meet a physical challenge. She might be tired and ready to collapse after a ride but if you ask her for more she will give it. P definitely asked. We spent a good 30 minutes just warming Aria up on the lunge line. With the extra weight and all the trail riding we’ve been doing lately, she’s a lot stiffer than she was when I first got her. That’s fine. We can work on her flexibility through autumn and winter. It’s too hot for me to want to really work all that hard at our show goals for next year.

She’s pretending she doesn’t have any energy.

I had to mount using a stirrup because saddles aren’t designed to fit round potatoes and I didn’t want to fall off the horse before I had even gotten on it. That’s a fear that was sitting in my mind. I’m always concerned that I rely too much on my stirrups to keep me in the saddle. I definitely feel this way because the balls of my feet go numb when I ride suggesting I put too much weight into my stirrups. My knees and butt hurt after a good ride, so my stirrup length, in theory anyway, is good. Of course if anyone has some suggestions, throw them my way.

Starting off a little stiff. No cherry picked pictures today. I’m dumping whatever I have.

Where was I going with this? Oh right, falling off. It’s amazing how you can sit a spook/buck/rear/spin/blot/shenanigans and still believe you don’t have a seat without stirrups. That’s some pretty jacked up logic, brain. But it’s still real. So much so that P just straight up asked if I wanted to work on a lunge line so I could focus on my seat and not so much guiding Aria. 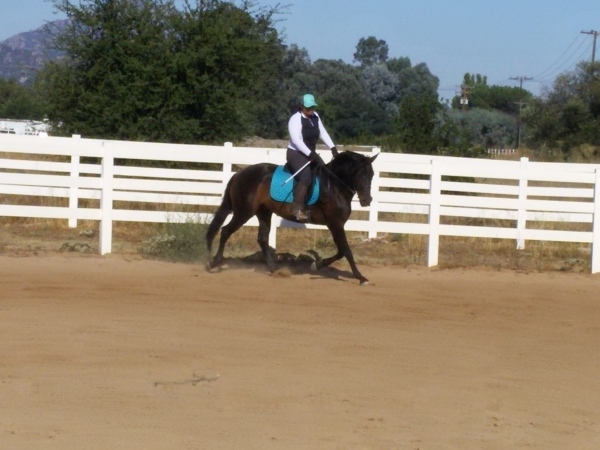 Very wide hands. This will be a problem the whole ride. Let’s blame…boobs? 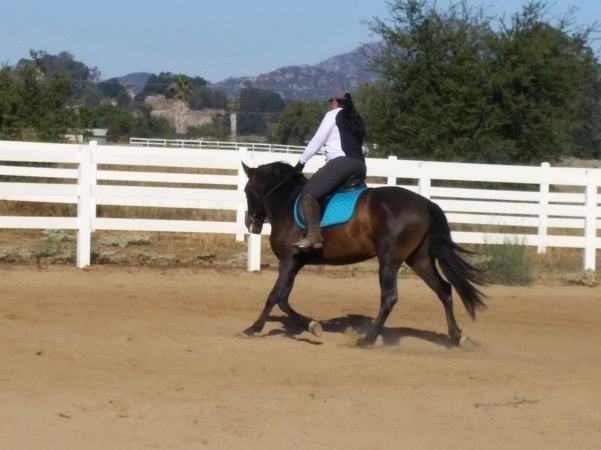 Leaning forward. Makes it hard for Aria to engage her back end.

I do appreciate the dance P and I do. She knows when to push me out of my comfort zone but also knows when to reel me back in because I’m flying too close to the sun. I mean, I had already started my lesson before she suddenly exclaimed ‘oh my god, Karen! You aren’t wearing a helmet!’. Oh, really? I hadn’t noticed because that’s how I always ride. What’s more rational than riding a baby horse without a helmet? The arena is soft and I’m sure with all my extra ‘cushion’ I’ll bounce. 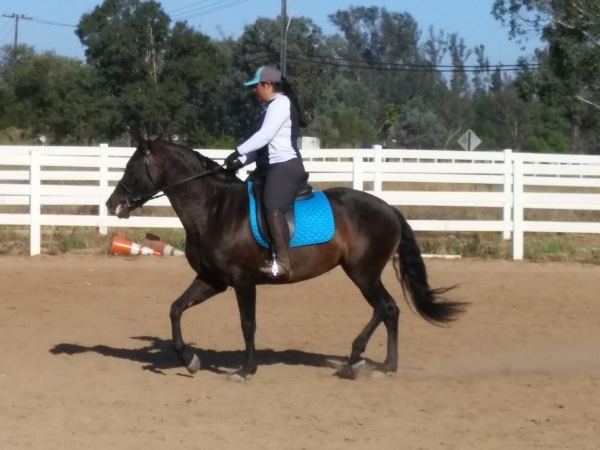 FYI, to harken back to an old post I’m actually down 47lbs from the weight I was when I purchased Aria almost 2 years ago. I’m ounces away from my first short term goal weight. So the cushion I’m relying on to save my life is considerably less and probably not as effective anymore because my butt hurts a lot when I sit for too long. My butt bones really miss all that extra padding. Frowny face.

Back to the lesson, I started off quite wobbly because of that silly thing called centrifugal force but once I remembered to sit in my saddle things turned out rather well. It is amazing to me how I can sit on a horse and not be sitting in the saddle. I dropped my inside seat bone and it did wonders. I made that my main focus of the ride but I still had to multitask because P was not going to put up with the shit show ride I was giving her.

Over bending and diving in on the shoulder.

By shit show I mean that Aria was strung out and charging along with no rhythm or structure to her movements. She was going in a circle but only because P had a line on her. We could have been heading to West Virginia and I wouldn’t have known it because I kept focusing on what my seat wasn’t was doing. First I worked on checking her speed and getting her to slow down (which, gasp, helped my seat!). Once she was moving along at mach 1 instead of mach 10 I asked her to round and work off her hind end. She was a little over flexed but I think that might have been because of the lead line.

Looking supple. Now if I would only look up!

We did some lateral work and counter bending to help straighten her out. Her chest is so wide and her reach in the front is so large on top of being so wide that her lateral work at the trot in a circle is just…insanity. I felt like we were going so fast and the cadence to that step was so big that it took me a while to get used to it. When we work on a true extended trot, I’m going to have the hardest time posting and sitting it.

Aria was working in a frame and powering through the lateral work so nicely that I really wished I had media from the lesson. When I feel that kind of movement and know that the movement is working at a level we’ve never worked before I get really excited. I’m very, very eager to unlock Aria’s full potential. It gives me a little thrill when I feel her moving like that, even if I’m a sack of potatoes on a potato. Haha. 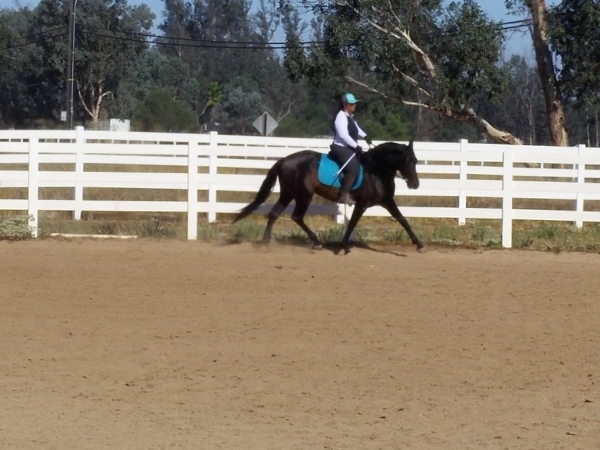 At this point we came off the leash and started working the full arena with P giving instructions. We did the normal shoulder in/shoulder out for a few laps then worked on lateral zigzagging from the centerline to the quarterline. Towards the end of the lesson I think I was either getting lazy or starting to flag in energy because P barked at me when I was at C to get it together. Perfect practice makes perfect and P and R are not going to let me forget it!

And we look nice but we’ve lost some of our hind-end engagement. She was probably rooting. 😡

Just as I pulled us back together our lesson wrapped up. P said it was the best work she’s ever seen out of us. I’m going to say it’s because I spend 4-5 days a week on Aria now and we’ve gotten to know each other really well, but I also wonder if the lack of stirrups may have helped. It makes me look forward to our show season next year. It also makes me look forward to getting back in the arena this autumn and really putting our noses to the grindstone. 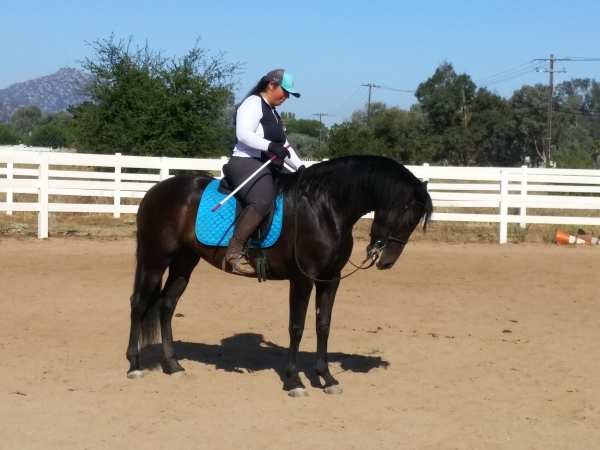 Good ride overall. We were both happy.

4 thoughts on “No Stirrups”