Now that I have Catalina’s name squared away, I feel better. I was getting antsy with everyone asking me almost daily if I had named her. We have an island off our coast called Catalina, so her name isn’t just Spanish, it’s also a nod to Southern Californian.

I have plans to go to the Diamond Jubilee Horse Show at the Del Mar Horsepark on April 6-9 but I just found out that Carl Hester is going to be doing a clinic on April 7-8 a couple blocks down at the Del Mar Arena. I may try to hit up both. The show has a lot of Iberian classes and I don’t want to miss it but I also want to hit up this clinic. The good thing is that Carl Hester’s clinic is pretty much identical both days, so I just need to look at the show program to decide if I want to skip Sunday or Saturday. 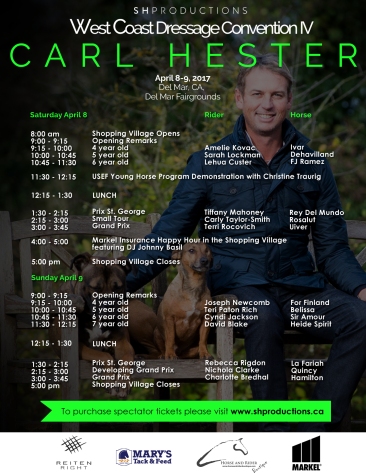 I’m also going to be going to the Fiesta of the Spanish Horse at the Los Angeles Equestrian Center on April 27-30. I’m hoping next year I’ll actually be participating as a competitor and think it’s a good idea to get a grasp of what the current competition looks like. Plus both my past trainer and current trainer have both participated in or done an exhibition at this show. Sunday night is their charity show and they’ve donated to sevearl cancer research programs in the past.

I just got my IALHA membership card. I’m part of the fancy but dramatic horse club now (seriously, I hear the NA Iberian registries are full of drama). Next I have to register Valeria in my name and then get Catalina registered. There’s about 16 other mares with Catalina for a name. I’m going to have to figure out what I want to add for registry purposes. Valeria’s registered name is Ingrata 2010 but I don’t think I’m going to go that route. I could tag my initials at the end. Catalina KP. Not that I like the way it sounds at all. I may ask the breeder if I can use his nomenclature. Catalina MA. Any ideas on this? How do you name your horses in their registries?

p.s. I have a post coming on Valeria’s difficult labor and I might have a post about a first ride on a particular mare I have in training.